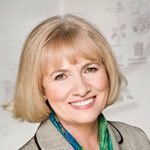 Secretary of State of the Polish Ministry of Science and Higher Education, Representing the Polish Presidency of the EU Council.

Maria Elżbieta Orłowska received a PhD degree in Technology at the Warsaw University of Technology, in 2003 she became Doctor of Science at the University of Queensland, Australia, and in 2004 she obtained a post-doctoral degree at the Institute of Computer Science of the Polish Academy of Sciences. Since 2004 she has been a fellow of the Australian Academy of Science. From 1988 till 2007 she held the position of Professor of Information Systems at the School of Information Technology and Electric Engineering at the University of Queensland. From 1995 to 2007 she headed the school's Data and Knowledge Engineering Research Division. From 1992 she acted as the Distributed Databases Unit Leader, and more recently the leader of the Workflow Technology Group for the Cooperative Research Centre for Distributed Systems Technology Pty Ltd. (DSTC). She was also a Board Member of the Australian Research Council. Author or co-author of nearly 300 research papers published in peer reviewed international journals. In recognition of scientific activity and contributions to applied research, she was awarded many prestigious distinctions e.g.: the Distinguished Research Fellow of DSTC Pty Ltd., the Queensland government IT&T Award for Transactional Workflows Systems. Since November 2007 Professor Orłowska has been Honorary Professor of the University of Queensland. In 1997 she returned to Poland and became Professor at the Polish-Japanese Institute of Information Technology and since 2008 she has been Secretary of State in the Polish Ministry of Science and Higher Education. Recently she has been rewarded the title of doctor honoris causa of the University of Queensland.