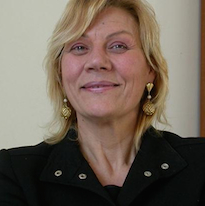 Prof Franconi MD is full professor of Pharmacology at University of Sassari and the Coordinator the PhD in Gender Pharmacology. She is a member of the National Advisory Board on Menopause Guidelines, Women’s Health Committee of the Health Minister, Committee “Valutazione Piani di Settore”, and the Working Group on “Drugs and Gender “of the Italian Drug Agency. She participated UN meeting on Gender, Paris 2010. She is referee of many international journals, and amongst others, on the editorial board of Gender Medicine. She organized the second edition of Summer School of Eugim Project in Sassari 19-22 September 2011, as well as many Italian meetings and two international meetings on Genes, Drugs and Gender. During her presidency of the Italian Gender Health Group, two websites were launched on gender (giseg.org and medicinagenere.org) to incorporate and implement gender issues. In particular, last year she promoted a nationwide companion entitled “Gender Attention” which utilises viral video. Prof Franconi has published about 170 papers in international journals and many of them evidence the sex-gender difference in drug-response. In collaboration with the Department of Drug of Italian National Institute of Heath, she evidenced that the cell fate, especially apoptosis and autophagy, are sex-gender dependent process, at least in some cell type such as vascular smooth muscle cells. Moreover she evidenced that sex-gender differences starts very early in the life. She is currently involved in studying the influence of environment in the response of drugs