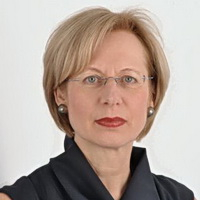 Elke Anklam obtained her degree in Food Chemistry from the University of Münster, Germany in 1981 and her PhD in Organic Chemistry from the University of Hamburg, Germany in 1985, followed by a post-doctoral year in the University of Strasbourg, France. She worked as a researcher in the Hahn-Meitner Institute in Berlin, Germany and was teaching as Professor in the Applied University of Fulda, Germany. Since 2006 she is Director of the Institute for Health and Consumer Protection (IHCP) located in Ispra, Italy – one of the seven Institutes of the European Commission's Joint Research Centre (JRC). She worked in several positions in the JRC since 1991 (Deputy Director in the JRC Institute for Reference Materials and Measurements (IRMM) in Geel, Belgium; Head of Unit in the IHCP and IRMM).

Prof Anklam spoke about Gender Equality in customer driven research based policy support in Session C4: EXCELLENCE AND RESPONSIBILITY OF SCIENCE Gender as a scientific quality value at the Gender Summit 1 EU (GS1EU).