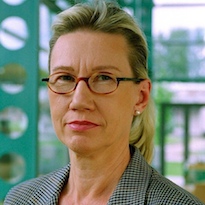 Professor Makarow has been Chief Executive of the European Science Foundation (ESF) since January 2008. She is Professor of applied biochemistry and molecular biology at the University of Helsinki, where she was Vice-Rector for Research prior to her ESF position and has served on boards and strategic councils of several universities. Marja Makarow is an advisor to the Finnish Government in the Council for Research and Innovation Policy, and to the EU Commissioner for Research in the European Research Area Board. Her responsibilities have included the presidency of the European Molecular Biology Conference (EMBC/EMBO) and membership of the Council of the European Molecular Biology Laboratory (EMBL). She chairs one of the evaluation panels of the European Research Council and has served as expert for research funding organisations in Austria, Belgium, Canada, Finland and Ireland. Marja Makarow is the recipient of several awards, honours and decorations, and has published widely in reputed scientific journals.

Prof Makarowdelivered a keynote and acted as Chair Session B2: COLLABORATIVE STRENGTH Working better as teams at the Gender Summit 1 Europe (GS1Eu).