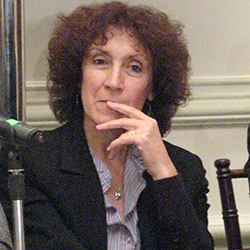 Dr Julia Tagüeña holds the post of Deputy Director General for Scientific Development af the Mexican National Council of Science and Technology (CONACYT). In this role, she has strengthened the efforts of scientists, both in the basic and applied fields, to advance their research, and encouraged innovation that is based on science. For over 25 years, she has been a research professor at the Universidad Nacional Autónoma de México (UNAM). She studied physics at UNAM and obtained a PhD at Oxford University. Her main fields of research are solid-state physics and renewable energies, and she has also worked extensively on science communication. She is a member of the Mexico's National Research System, with the highest rank, and of different societies, such the Mexican Academy of Sciences and the Institute of Physics of the United Kingdom. She has also worked on science communication, and she is a former director of RedPOP, the Latin American and Caribbean Network for the Popularization of Science and Technology.