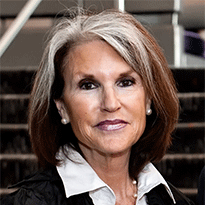 Phyllis E. Greenberger, M.S.W., is the President and CEO of the Society for Women’s Health Research (SWHR), a national non-profit organization based in Washington DC, is widely recognized as the thought leader in women’s health research. SWHR’s mission is to improve the health of all women through advocacy, education and research. Greenberger is the first and only President and CEO of SWHR since it's founding in 1990. Through her leadership, dedication and promotion of women’s health, sex differences is now widely known and recognized as a critical factor in women’s health. The Medical Herald selected her as one of the twenty most influential women in medicine today. In 2006, Greenberger was named one of Washingtonian’s 100 Most Powerful Women by Washingtonian Magazine. Woman’s Day magazine awarded Greenberger the 2006 “Red Dress Award” in recognition of her work in leading the way in the fight against heart disease in women, and in 2010 named her one of 50 “Women Who Are Changing the World.” She is profiled in the book Extraordinary Women: Fantasies Revealed (Stewart, Tabori and Chang, 2006), which features profiles and portraits of 58 prominent women in the United States. Greenberger with Dr. Jennifer Wider is the editor of the book The Savvy Woman Patient: How and Why Your Sex Impacts Your Health (Capitol Books, 2006). Besides sitting on SWHR's Board of Directors, Greenberger currently serves on the Scientific Advisory Board for WomenHeart, a national coalition for women with heart disease; is a board member of the Interstitial Cystitis Association; resides on the Editorial Board for Shape magazine; serves on the Women’s Task Force for the National Hemophilia Foundation; and is a member of the International Women’s Forum and the National Association of Professional Women (NAPW).