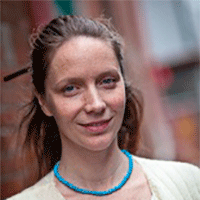 Kim Cobb is an associate professor in the School of Earth and Atmospheric Sciences at the Georgia Institute of Technology. Kim was born in 1974 in Madison, Virginia, and grew up in Pittsfield, MA. She became interested in oceanography during her sophomore year in high school, when she attended a summer program at the Wood’s Hole Oceanographic Institute, in Falmouth, MA. She obtained her BA from Yale University in 1996, majoring in biology and geology, with a minor in art history. In 1994 she attended a summer program at the Scripps Institute of Oceanography, in La Jolla, CA, after which she decided to pursue a graduate degree in Oceanography at Scripps. After earning her Ph.D. in Oceanography in 2002, she spent two years at Caltech in the Department of Geological and Planetary Sciences as a postdoctoral fellow before joining the faculty at Georgia Tech in 2004. Kim has sailed on six oceanographic cruises as part of her research, which is based in the tropical Pacific. She has also led five caving expeditions to the rainforests of Borneo for her research. She is very active in community outreach, giving scientific lectures to schools, church groups, and other public gatherings. In what little spare time she has, she enjoys swimming, hiking, and sewing.