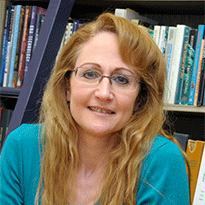 Jo Handelsman is a Howard Hughes Medical Institute Professor and Frederick Phineas Rose Professor in the Department of Molecular, Cellular and Developmental Biology at Yale University. She received her PhD. in Molecular Biology from the University of Wisconsin-Madison in 1984 and she served on the faculty at the University of Wisconsin-Madison from 1985 until moving to Yale in 2010. Her research focuses on the genetic and functional diversity of microorganisms in soil, plant and insect gut communities. Handelsman’s lab is one of the pioneers of functional metagenomics, an approach to accessing the genetic potential of unculturable bacteria in environmental samples. Their studies using both culture-based and metagenomic analyses have led to discovery of novel antibiotics and determinants of antibiotic resistance and expanded understanding of multispecies interactions that enhance or diminish the health of host animals and plants.  In addition to her microbiology research program, Handelsman is also known internationally for her efforts to improve science education and increase the participation of women and minorities in science at the university level. She co-founded the Women in Science and Engineering Leadership Institute at UW-Madison, which designed and evaluated interventions intended to enhance the participation of women in science, and founded The Center for Scientific Teaching at Yale, which provides local and national leadership in transforming classroom teaching in science and engineering. Her leadership in education and women in science led to her appointment as the first President of the Rosalind Franklin Society, her service on the National Academies' panel that wrote the 2006 report, "Beyond Bias and Barriers: Fulfilling the Potential of Women in Academic Science and Engineering," appointment as co-Director of the National Academies Summer Institutes on Undergraduate Education in Biology, and her role as co-chair of a working group that produced the report to President Obama, “Engage to Excel: Producing One Million Additional College Graduates with Degrees in Science, Technology, Engineering, and Mathematics.”

Professor Hanedelsman spoke about pervasive gender bias favouring men that has been shown to influence the decisions of both female and male faculty, regardless of STEM field, at the Gender Summit 3 North America 2013 (GS3NA). This bias is unintended and probably linked to unconscious processes influenced by numerous aspects of culture rather than deliberate discrimination, but the effect is that women, right from the start of their science careers face more obstacles than men, and new approaches are needed to reduce these barriers to women's advancement.