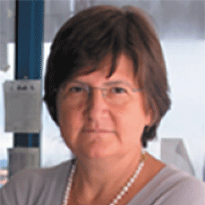 Daniela Corda PhD is a cell biologist, Director of the Institute of Protein Biochemistry of the National Research Council in Naples, Italy. She obtained her degree in Biological Sciences at Perugia University, Italy and her PhD in Life Sciences at the Weizmann Institute of Science, Rehovot, Israel. She has been working in the signal transduction and membrane lipid dynamics field for more than 20 years, first in Israel, and then at the National Institutes of Health, Bethesda, USA, for her post-doctoral studies. She moved to the “Mario Negri” Pharmacological Research Institute in Milan in 1986, and in 1987 she was one of the founders of the Consorzio Mario Negri Sud, where she served as Head of the Department of Cell Biology and Oncology from 1996 to 2003 and Director of Research and development until 2009. Since 1998 she has been active in science policy focussing on career development in Europe and on gender-related issues within European organisation such as the European Life Scientist Organisation (ELSO), the EC Marie Curie Programme, the Federation of European Biochemical Societies (FEBS) where she now chairs the Working Group on the Career of Young Scientists, and is a member of the genSET Science Leaders Panel.