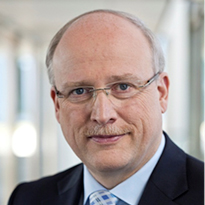 Alexander Kurz PhD was born in 1961 and studied law in Regensburg and Tübingen. Following a legal traineeship, also undertaken in Tübingen, he passed the Second State Examination in Law. He went on to receive a part-time doctoral qualification from the German University of Administrative Sciences in Speyer. From 1989 to 2000 he held a number of positions at the Forschungszentrum Karlsruhe, lastly as head of the Personnel and Social Affairs department of this research center. He then moved to CERN, the European Organization for Nuclear Research in Geneva, where until 2005 he headed the central Industrial Services Management department and was deputy head of Purchasing and Logistics. From 2005 to 2007 he was Administrative Director of GSI (now the GSI Helmholtz Center for Heavy Ion Research). While there he was responsible for setting up the legal and administrative framework for the FAIR project. In December 2007 he moved from GSI to the Forschungszentrum Karlsruhe to be its business affairs director and deputy chairman. Following the formation of the Karlsruhe Institute of Technology, Alexander Kurz became Vice President for Finance and Business Affairs as well as Acting Vice President for Human Resources. Since June 2011 he has been Senior Vice President for Human Resources, Legal Affairs and IP-Management at the Fraunhofer-Gesellschaft in Munich.