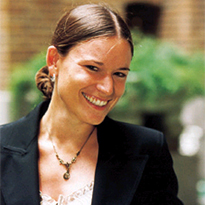 Sabine Ludwig has studied in Paris, Shanghai, Beijing, Berlin and Frankfurt and holds advanced degrees in economics from Germany and France. Besides the economics degree, she holds an advanced degree in Chinese studies. After graduation, she worked at the European Commission in the Directorate General for External Relations in Brussels, Belgium. She participated then in the EU-China Coo-operation project “Junior Managers Training Programme” established by the European Commission and the Chinese Ministry of Foreign Trade and Economic Co-operation in Beijing, China. Following this programme, she joined the Delegation of the European Commission to China in Beijing, where she worked in the Development and Cooperation section.  After six years in China, she returned to Germany in 2008 where she works at Charité - Universitätsmedizin Berlin, the Medical Faculty of Humboldt University and Free University Berlin. Her first assignment was as Research associate within the Masterprogramme International Health and since 2010, she is a member of the Curriculum Development team for the new modular medical curriculum of Charité Berlin in charge of integrating gender medicine issues and gender concepts into the new programme.

Ms Ludwig spoke on A systematic approach to integrate gender dimensions and perspectives into a newly developed medical curriculum in Plenary Session 5 Advancing Considerations of Gender in Research Methods at the Gender Summit 4 EU 2014.