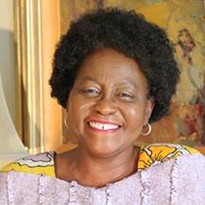 Professor Olive Shisana holds a Masters of Clinical Psychology from Loyola Colleage in Baltimore, Doctor of Science from Johns Hopkins University,  Bloomberg School of Public Health  and  is Chief Executive Officer of the HSRC, Honorary Professor at the University of Cape Town, former Professor of the Medunsa School of Public Health,  founder of the University of the Western Cape Public Health Programme, first Director General of Health appointed under the former President Nelson  Mandela’s  administration. She is also the  immediate past President of International Social Science Council (ISSC) and continues to serve on the Executive Committee of the ISSC. Prior to this she served as HSRC’s Executive Director of Social Aspects of HIV/AIDS and Health, previously Executive Director, Family and Community Health,  World Health Organization, Geneva, Switzerland.

She is an authority in HIV surveillance, having been a principal investigator for several second generation surveillance systems for HIV. She was one of the founders of the South African National Health and Nutrition Examination Survey as well as the Maternal and Child Mortality Surveillance. She is well published in international scientific journals and books. She served on many national and international scientific committees and advisory boards, such as the Ministerial Advisory Committee for National Health Insurance, the US Institute of Medicine’s Committee on Methodological Challenges in HIV Prevention Trials, the Emory University Global Health Institute Advisory Board, the South African National AIDS Council and the chair of the Nelson Mandela’s 46664 Board.  She chairs The Committee of Heads of Research and Technology (COHORT) in South Africa.  She  chairs the South Africa’s BRICS Think Tank as well as the AIDS 2016 Global Conference South African where she is a Co-Chair. She is listed as one of the 2013 City Press’ 100 world class South Africans.  Professor Shisana won the South African Academy of Sciences Science-for-Society Gold Medal in 2013. She has recently (2014) been awarded the degree of Doctor of Laws honoris causa by Monash University.