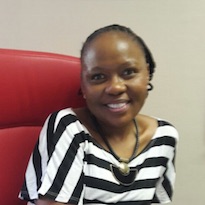 )
Topic B: Learning from and overcoming gender disparities through research

Dr Motaung started her career at TUT in March 1998 as a lecturer. In 1999, she was granted a Technikon Pretoria Research Fund Bursary and in 2001 she received DAAD (German Scholarship) to complete a Master’s degree. She then enrolled for a Master’s degree in Biomedical Technology at the former Technikon Pretoria, which she completed in 2003. In the same year she won a Catalyst Innovation Competition for the most commercially viable innovation developed at a South African University or Technikon.

In 2003, she received the Vice-Chancellor’s award in recognition for exceptional excellence and achievement at Technikon Pretoria. In 2006, Dr Motaung became the first female at TUT to receive a Fulbright Scholarship to pursue her D Tech at University of California, Davis, USA. She obtained her D Tech in 2010, at TUT, in collaboration with University of California, Davis, where she worked under the supervision of Prof Hari Reddi, a world-renowned scientist in Morphogenetic Proteins and Regenerative Medicine.  Self-assured and systematic, Dr Motaung has been invited as a speaker and visiting researcher at several international conferences and universities.