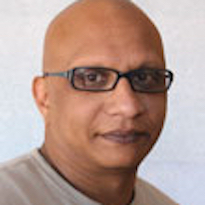 Professor Vasu Reddy is the Executive Director in the Human and Social Development research programme. He holds an MA in comparative literature from the University of the Witwatersrand, and a PhD in gender studies from the University of KwaZulu-Natal (UKZN). He taught for 13 years at the University of Natal in the Faculty of Humanities, Social Science and Development where he pioneered development of undergraduate and postgraduate courses (including supervision of dissertations) in Gender Studies and Interdisciplinary Programmes.

He is currently an Honorary Associate Professor and Research Fellow at the UKZN. Professor Reddy is also a regular external examiner of Masters and Doctoral Studies for the Universities of Cape Town, Western Cape and Witwatersrand.  Before joining the HSRC in July 2006, he was the head of Gender Studies at UKZN's Howard College Campus.  His research interests include interdisciplinary studies on the discursive histories of sexualities and identities, social and cultural aspects of HIV/AIDS and its representations, critical gender (and legal) studies, comparative studies, African feminism(s), social cohesion, narrative and performances, race and class, and service provision in a developmental context.  Prof Reddy's current research involves leading a number of multi-year projects, such as The Mac Aids Fund Leadership Initiative which trains and supports Fellows to develop, implement, and disseminate prevention plans addressing the link between HIV and gender in order to reduce the spread and impact of HIV/AIDS in South Africa. This is a project that is run jointly with Columbia University and the University of California (Los Angeles). Another project, currently in its third year (funded by the NIMH and run jointly with Professor Theo Sandfort, Columbia University) is titled "HIV and Sexual Risk in African Men who have Sex with Men (MSM) in Tshwane Townships" Other recent projects include a UNDP Funded Project that addressed Securing the Voice of African Men Who Have Sex with Men (MSM) within HIV and AIDS Development Policy and Programming in Eastern and Southern Africa?. An OSISA-funded project, currently nearing completion is titled Raising Visibility of Lesbian, Bisexual and Other Women Who Have Sex with Women (WSW) in relation to HIV and AIDS in Southern Africa: A cross-country project addressing health and community-building for advocacy in conjunction with Columbia University and community organisations from South Africa, Botswana and Namibia.  Professor Reddy's publication record spans the authoring and co-authoring of more than 30 indexed journal articles, over ten book chapters, and several guest editorships of peer reviewed journals. He also presents regularly at National and International Conferences.  He is the lead editor of From Social Silence to Social Science: Same-Sex Sexuality, HIV & AIDS and Gender in South Africa (co-editors: Theo Sandfort, Laetitia Rispel, HSRC Press, 2009) and co-author of The Country We Want to Live In: Hate Crimes and Homophobia in the Lives of Black Lesbian South Africans (with Nonhlanhla Mkhize, Jane Bennett and Relebohile Moletsane, HSRC Press, 2010). He is currently working on two book projects and two guest editorships of special editions of journals.  In addition to research, Professor Reddy sits on the Boards, either as Chairperson or as a member of non-governmental organisations in South Africa. He is also an Editorial Collective Member of Agenda (an African Feminist Journal, published by Taylor and Francis). He also reviews manuscripts for internationational scholarly journals such as Culture, Health Sexuality, Reproductive Health Matters, Feminist Media Studies. In addition to research, Professor Reddy has a keen interest in food and good red wine (both in terms of taste, aesthetics and idea).