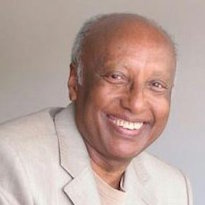 Director of the African Academies of Sciences, International.

Berhanu Abegaz is the Executive Director of the African Academy of Sciences having been appointed to the post in March 2011. Abegaz was born in Ethiopia. After receiving his B.Sc. in Chemistry in 1968 he was awarded an AFGRAD Scholarship and joined the Graduate Program in Chemistry at the University of Vermont, USA, where he studied under the mentorship of Professor A. PaulKrapcho. He was awarded a Ph.D. in 1973 for his dissertation entitled “Photochemistry of Polymethylene-ketene Dimers and Polyspirocyclobutanones. Before joining AAS Prof Abegaz was professor of chemistry at the University of Botswana in Gaborone for 17 years. He has also been a member of the chemistry department at the Addis Ababa University in Ethiopia from 1973 until 1994. He was elected a member of the Third World Academy of Sciences in 1998.

Since 2002, he has been a provisional member of the IUPAC Organic and Biomolecular Chemistry Division. A vigorous researcher in the field of natural products chemistry, Abegaz has published ca 170 scientific papers and supervised the research of 17 M.S., 10 Ph.D., and 3 postdoctoral students. Beyond the walls of the university, from 1983 to 1987 he served as the first president of the Chemical Society of Ethiopia, and from 1987 to 1994 was founding editor of the Bulletin of the Chemical Society of Ethiopia. From 1984 to 1996 he was a founding member of the Natural Products Research Network for Eastern and Central Africa, and from 1992 to 2011 founded and coordinated the Network for Analytical and Biological Services for Africa (NABSA). He has served in several international committees such as IOCD, ICSU, IFS  Advisory Board, UNESCO IBSP, and as member of the Advisory Board of a number of international Journals. He has also received a few awards of merit, such as the Pierre Crabe Award, the CNR Rao Award, the IFS-DANIDA award, and the Chemical Society Award of Merit.