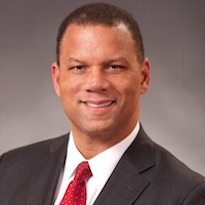 Acting Dean of the Graduate School and  Associate Professor in the School of Public Affairs and Administration (SPAA), Rutgers University-Newark, USA.

Prior to joining the faculty of Rutgers, Farmbry taught at The University of Texas at San Antonio in San Antonio, Texas, San Diego State University in San Diego, California and Grand Valley State University in Grand Rapids, Michigan. He has also served as a visiting lecturer at the University of Gdansk in Gdansk, Poland, Benxi University in Benxi, China, and for the municipality of Orastie, Romania. Dr Farmbry's current research interests are in the areas of intersectoral dynamics, private and independent sector entrepreneurial development, the roles of the public, private, and nonprofit sectors in facilitating minority enterprise development, and the role of community voice in public administration. He has presented his research throughout the United States, as well as in Australia, The United Kingdom, Sweden, The Netherlands, and South Africa.

In February of 2009, Dr Farmbry was selected as one of thirty-five people from around the world to serve as a Fulbright New Century Scholar. In this role, he was engaged in research examining factors of youth entrepreneurial and civic engagement in South Africa. In 2005, he was awarded a grant from the Japan Foundation’s Center for Global Partnerships for a project entitled U.S.-Japanese NGO Network Development in the HIV/AIDS Crisis for exploratory work on nongovernmental organizations working in Japan on HIV/AIDS. He also was awarded the 2005 William Diaz Research Fellowship from the Nonprofit Academic Centers Council for a project entitled Patterns of Nongovernmental Network Formation and the South African HIV/AIDS Crisis.

Dr Farmbry received his BA, MPA, and Ph.D. degrees from The George Washington University. He completed his J.D. degree at the Rutgers University School of Law.

In June of 2014, Dr Farmbry was elected to serve as a member of the Board of Trustees of The George Washington University.