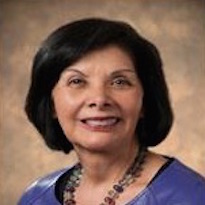 A Translation from Theory to Practice
Knowledge Exchange Forum: Women of the African Diaspora in STEM Academic Leadership

Dr Patricia Arredondo became president of Chicago campus of The Chicago School of Professional Psychology in February 2013. She joined the school after successfully serving in senior administrative roles and as a Full Professor in Counseling Psychology with the University of Wisconsin-Milwaukee and Arizona State University. Additionally, she led an organizational consulting firm addressing diversity in the workplace in Boston for 13 years.  In the academic world, Dr Arredondo is a national leader and scholar on many fronts, extensively published in the areas of multicultural competency development, immigrant issues in counseling, counseling with Latinas/os, women’s leadership and, organizational diversity.

She has authored more than 100 referred journal articles, book chapters, and training videos and is regularly invited for keynote addresses nationally and internationally. Her most recent book, Culturally Responsive Counseling for Latinas/os was published in 2014 by the American Counseling Association (ACA) Press. Currently, Dr Arredondo is also Co-Principal Investigator on a three-year training grant from the National Science Foundation that advances women of color in the STEM fields to administrative opportunities at Historically Black Colleges and Universities and Tribal Colleges. She considers herself a social justice advocate and an educator at heart.  Civic and professional organization leadership is visible throughout Dr Arredondo’s career. She served as president of four national associations, among these were the American Counseling Association (ACA), the largest counseling association in the world. She is the only Latina to serve in that position. Dr Arredondo was also president of the American Psychological Association Division 45 - Society for the Psychological Study of Ethnic Minority Issues, the Association of Multicultural Counseling and Development of the ACA and the founding president of the National Latina/o Psychological. Currently, she serves as Chair for the Board of Professional Affairs for the American Psychological Association. In the civic arena, Dr Arredondo has always been active in community organizations. Among her leadership roles were president of the Board of Family and Children’s Services in Boston, on the board of the Diversity Leadership Committee for the City of Phoenix, Vice-Chair of the Social Development Commission for Milwaukee County, the largest anti-poverty organization in Wisconsin, and more recently she was appointed to the Advisory Board for DiversityMBA in Chicago.  Dr Arredondo has been the recipient of many awards and recognitions throughout her career. These awards acknowledge her as a “pioneer” or change agent in her profession. She is the 2013 recipient of the prestigious Henry Tomes Award for Distinguished Lifetime Contributions to the Advancement of Ethnic Minority Psychology, the “Living Legend” award from the ACA, the Lifetime Achievement Award from APA Division 45, the Madrina Award by the National Latina/o Psychological Association, and an honorary degree from the University of San Diego; she also holds Fellow status with the American Counseling and American Psychological Associations. She enjoys promoting women’s leadership, mentoring graduate students, emerging professionals, entrepreneurs, and individuals who want to make a difference on behalf of others.  Dr Arredondo holds degrees from Kent State University, Boston College, and Boston University. She is a licensed psychologist and bilingual in English and Spanish. Dr Arredondo is extremely proud of her Mexican American heritage.