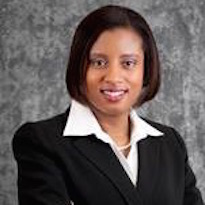 A Translation from Theory to Practice
Knowledge Exchange Forum: Women of the African Diaspora in STEM Academic Leadership

Stephanie Luster-Teasley, Ph.D. is an associate professor with a joint appointment in the department of civil, architectural and environmental engineering and the department of chemical, biological and bioengineering at North Carolina A&T State University. She joined NCA&T in 2004 after working in private industry as an environmental engineer. Her research specializations include environmental remediation, water sustainability, and engineering education. Over the last ten years, she has been driven by a deep commitment and care for her students and lauded for bringing the excitement of real-world, hands-on experience into all of her engineering courses and mentoring activities.

Dr Luster-Teasley has demonstrated excellence in teaching, research, and service.  In 2013, she reached several a milestones in her career as a teacher and researcher. In May 2013, her teaching and engineering education work has resulted in her receiving the 2013 UNC Board of Governors Teaching Excellence Award. This honor is one of the highest awards conferred for teaching in the UNC System.  In August 2013, she received United States Patent No. 8,519,061, hence becoming the first female African-American faculty member to be named inventor on a patent issued to N.C. A&T for her development of a controlled release chemical oxidation polymer system for the remediation of wastewater.   The polymer system, which she explains works like an "environmental pill" is able to slowly release the chemical oxidation treatment at controlled rates. The biodegradable polymer used in her invention, combined with the chemical oxidants are effective at the reduction of bacteria concentrations in wastewater and the improvement of color and odor. In 2014, she was among the first cohort of fellows to complete the National Science Foundation Opportunities for Under Represented Scholars (OURS) Post Graduate Certificate in Academic Leadership at The Chicago School of Professional Psychology (TCSPP). The program is designed to prepare women in the science, technology, engineering, and mathematics (STEM) disciplines at Historically Black Colleges and Universities (HBCUs) for academic leadership roles, either within their STEM disciplines or within institutional administrations. She culminated the 2014 academic year by receiving the Dupont Minorities in Engineering Award at the National American Society for Engineering Education National Conference.  During her career, Dr Luster-Teasley has received funding from the Department of Education for developing a mentoring program for students in STEM disciplines, the National Science Foundation for developing and implementing case studies modules in science labs, and the Burroughs Wellcome Fund to implement science programs for middle school girls. Overall, her disciplinary and science education research includes over $3,000,000 in funding.  Other honors include the 2005 National Women of Color in Technology Educational Leadership Award, the 2006 Rookie Researcher of the Year Award, and the 2008 Junior Faculty Teaching Excellence Award.  In 2010, she led the N.C. A&T team that developed the winning National 4-H Science Youth Day experiment used by millions of K-8 students worldwide.       Luster-Teasley received her Bachelor of Science degree in chemical engineering from North Carolina A&T State University, a master of science in chemical engineering and doctoral degree in environmental engineering from Michigan State University.  She is married to Mr. Edward Teasley who is also an educator in Guilford County Schools and is the mother of two boys, Edward (age 17) and William (age 13).