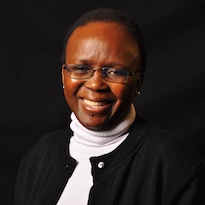 Welcome to the final day (download the presentation here

Prof P.E. Lukhele-Olorunju has qualifications in Agricultural sciences; BSc Agriculture 1978 (Swaziland), MSc Plant Breeding 1982 (Nigeria) and PhD Plant Breeding/ Virology 1990 (USA). She is an internationally respected Scientist and Educator: she has worked as a researcher in Agricultural research institutions and lectured at three renowned universities (Swaziland, Nigeria and South Africa). As a researcher and educator in Nigeria, she released a number of groundnut varieties for the country and West African region and also graduated a number of international students at BSc, MSc and PhD levels. Other experiences include international consulting and management of international agricultural projects, collaborative research projects with CGIAR Institutions and University of Georgia (USA).

Phindile managed three research institutions, as Group Executive, at the Agricultural Research Council of South Africa from 2002 to 2008. In 2009, Phindile joined the University of Venda, South Africa, as Director of Research and Innovation. In 2010 she moved to the Africa Institute of South Africa (AISA) as Director of Research and later Interim CEO of AISA 1 September 2012- 31 March 2014. She is currently an Acting Head of Section, AISA in the HSRC. Phindile is an ASI Fellow.