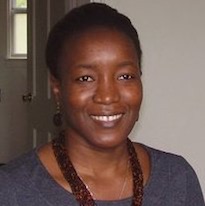 AIMS: Engaging women and men in the promotion of gender equality and inclusion in science
Knowledge Exchange Forum: Youth Engagement in STEM

Having graduated from AIMS in 2004, Dr Tendai Mugwagwa proceeded to study biomathematics at the University of Cape Town in 2005, before completing her PhD in theoretical immunology at Trecht University in 2010. In 2011, she conducted post-doctoral research on theoretical immunology, focusing on modelling influenza at Rochester University in the United States. Dr Mugwagwa is currently a post-doctoral researcher at the Imperial College London. Dr Mugwagwa’s research focuses on mathematical modelling of data on T lymphocyte dynamics. She is interested in developing mathematical models to interpret experimental data as well as quantify turnover rates of different cell subsets.

In her PhD studies at Utrecht University, the Netherlands, she worked on understanding the mechanisms of T cell homeostasis and trying to answer the question: "How long does a T cell live?” Understanding these basic concepts provided a clearer picture of the dynamics of T cells during lymphopenia driven, for example, by HIV infection and T cell dynamics during reconstitution. In 2011, the WHO estimated that there are 23.5 million cases of HIV/AIDS in sub-Saharan Africa, 3.1 million of these cases are children. With 1.7 million new cases occurring in sub-Saharan Africa in 2011 alone, along with many other health issues in Africa, Dr Mugwagwa’s work is of the utmost importance to Africa. When asked about AIMS’ effect on her life, Dr Mugwagwa stated that, “AIMS changed my view of science. Before, I used to see mathematics as a set of problems that needed solving, but now it is a set of tools that I can use to solve other life problems.”