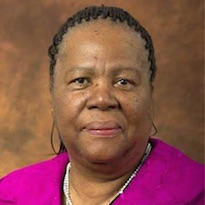 Naledi Pandor is South Africa’s Minister of Science and Technology. A life of exile from 1961 until 1984 resulted in an international flavour to her education. She holds a BA from the University of Botswana and Swaziland and an MA in Education from the University of London. In 1992 she studied for a Diploma in Higher Education, Administration and Leadership at Bryn Mawr in the USA. In 1997 she completed an MA in Linguistics at the University of Stellenbosch and a Diploma in Leadership in Development at the Kennedy School of Government at Harvard, while she was serving as an MP.

She became an MP in 1994 and has amassed impressive experience in positions of public office, including deputy chief whip of the ANC in the National Assembly from 1995 to 1998, deputy chairperson of the National Council of Provinces in 1998, and its Chairperson from 1999-2004. Her experience in education policy planning made her a welcome appointment as South Africa’s Minister of Education from 2004-2009. She was appointed Minister of Science and Technology in May 2009, and Minister of Home Affairs in October 2012. She was again appointed as Minister of Science and Technology in May 2014 following the 5th democratic elections in South Africa. The Cape Peninsula University of Technology and Stellenbosch University have awarded her honorary doctorates.