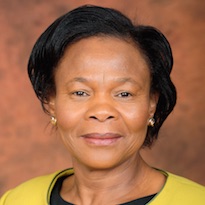 Minister in the Presidency responsible for Women, Republic of South Africa.

Ms Susan Shabangu is the Minister in The Presidency responsible for Women, with effect from 25 May 2014. She was previously Minister of Mineral Resources from 11 May 2009 until 24 May 2014.  She has been a member of the African National Congress (ANC) National Working Committee since December 2007 and a member of the National Executive Committee of the ANC since 2002 to date.

Ms Shabangu was involved in the anti-apartheid struggle in various capacities.  She was one of the women who led the revival of the Federation of South African Women during the time of high repression in the late 1978, leading up to the formation of the Federation of Transvaal Women, Natal Women’s Organisation, Port Elizabeth Women’s Organisation and United Women’s Congress. She became the Assistant Secretary of the Federation of Transvaal Women. In 1981 she was an active member of the Anti-Republic Campaign Committee and was involved in the formation of the Release Mandela Campaign Committee in 1982. Ms Shabangu was an organiser and administrator for the Amalgamated Black Worker's Project from 1984 to 1985; a representative of the Transport and General Worker's Union at the Industrial Council; and National Women's Coordinator for the Transport and General Workers’ Union (TGWU). She was also a member of the Congress of South African Trade Unions (Cosatu) National Women's Sub-Committee, working with women's issues and representing the TGWU at national level. She was involved in the voter-education programme with the Cosatu National Election Task Team aimed at workers during the election campaign. She served in the ANC National Election Steering Committee and was elected at a Cosatu Special Congress as a regional candidate to the National Assembly in 1994. Ms Shabangu was an advisor to the September Commission assigned to look at the future of the unions during the transitional stage and later she became a Member of Parliament. She actively participated in committees such as Labour, Transport and Trade and Industry during that period. Ms Shabangu also served in the ANC East Rand PCO Management Committee from 1995 to 1996. She was Deputy Minister of Minerals and Energy from April 1996 to April 2004 and Deputy Minister of Safety and Security from April 2004 to May 2009, before being appointed Minister of Mineral Resources. She also served as Vice-Chairperson of the National Labour and Economic Development Institute and National Treasurer of the South African National Civic Organisation.