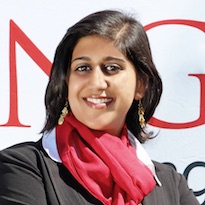 Hema is a chemical engineer by profession, and a change-maker by passion! Over and above her “day-job” as a process engineer with petrochemical giant Sasol, she co-founded WomEng, an international NPO developing the next generation of female engineering leaders in Africa. Driven by her passion for people and making a difference she founded her own company - The Passionate Professional, a Leadership Incubator with a focus on incubating leaders through Mentorship.

Through her incubator she aims to create a paradigm-shift in the way “Mentorship” is understood, approached and implemented. This is achieved through the novel and impactful range of Mentorship-related experiential training and service offerings developed by The Passionate Professional. As a visionary thought-leader, Hema has developed the novel concept of the “Mentorship Practitioner”, a person equipped to practice holistically in the Mentorship arena. Through her Mentorship Institute, she has spear-headed the development of the only formal Mentorship Practitioner qualification through a robust and in-depth 9 month program. A game-changer that is certain to transform the leadership development industry. She has recently partnered with the IDM, a new African business school, designed to help shape the next generation of leaders, to found the world’s first School of Mentorship. Being an opportunist and entrepreneur at heart, she has also recently co-founded a sister company to WomEng called JourneyMap, a people development, events & training consultancy. Her passion for the work she does has resulted in a number of accolades in recognition of her leadership. These include being awarded the South Africa’s Most Influential Women in Engineering title by CEO magazine, being branded as a “Change-Maker” by Oprah Magazine, being named as one of the Top 200 Young South African’s by Mail & Guardian and being selected as one of 27 women around the world to attend the FORTUNE/U.S. State Department Global Women’s Mentoring Program. Furthermore, she was invited to attend the Young African leaders Initiative hosted by Barack Obama during his visit to South Africa, and was also invited to do a TED Talk at the TEDxJohannesburgWomen. Most recently she has been invited to be a member of the African Leadership Network, a community of dynamic and influential leaders in Africa. At the recent gathering in Rwanda, she was asked to speak before President Paul Kagame, on behalf of over 250 leaders from 35 countries. However it is not these accolades that define her, but rather the impact that she has through her work. Her personal mantra is: "Life is all about passion, about being a part of something bigger, but most of all about making a difference!”