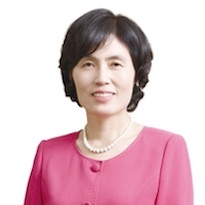 Dr Youngah Park serves as the President of KISTEP (Korea Institute of S&T Evaluation and Planning) since 2013. She also holds a professorship of physics at Myongji University since 1989. After completing her undergraduate studies at Seoul National University majoring in physics, she received her Ph.D. in physics from University of Pennsylvania in 1987.

Her research areas include critical phenomena, neural networks, soft matter, and biological physics.
She has been the chair of the Women in Physics Working Group of AAPPS (Association of the Asia Pacific Physical Societies) since 2006 and chaired the local organizing committee of the 3rd ICWIP (International Conference on Women in Physics) in 2008.
She was a member of the National Assembly from 2008 to 2012 serving as a representative for Songpa 1st district in Seoul. She also served as a member of the Committee on Education, Science and Technology at the National Assembly.
Her main areas of interest include R&D policy, science and innovation, STEM education, science diplomacy, and gender issues.