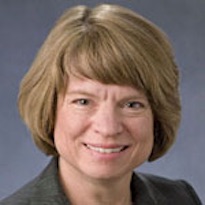 Where are the bottlenecks in STEM Majors and Careers? (download presentation here

Donna Ginther is a Professor of Economics and the Director of the Center for Science Technology & Economic Policy at the Institute for Policy & Social Research at the University of Kansas. Prior to joining the University of Kansas faculty, she was a research economist and associate policy adviser in the regional group of the Research Department of the Federal Reserve Bank of Atlanta from 2000 to 2002, and taught at Washington University from 1997 to 2000 and Southern Methodist University from 1995 to 1997. Her major fields of study are scientific labor markets, gender differences in employment outcomes, wage inequality, scientific entrepreneurship, and children's educational attainments.

Dr Ginther has published in several journals, including Science, Journal of the American Statistical Association, Journal of Economic Perspectives, Demography, and the Papers and Proceedings of the American Economic Association. She has also received research funding from the National Science Foundation, the National Institutes of Health, the Alfred P. Sloan Foundation and the Ewing Marion Kauffman Foundation. Her research has been featured in several media outlets including the Economist, New York Times, Washington Post, USA Today, NPR, and the Boston Globe. Dr Ginther has advised the National Academies of Science, the National Institutes of Health, and the Sloan Foundation on the diversity and future of the scientific workforce. She is currently a member of the Board of Trustees of the Southern Economic Association and was formerly on the board of the Committee on the Status of Women in the Economics Profession of the American Economic Association A native of Wisconsin, Dr Ginther received her doctorate in economics in 1995, master's degree in economics in 1991, and bachelor of arts in economics in 1987, all from the University of Wisconsin-Madison.

You can read more about Donna Ginther's academic career at:

This presentation reviews the evidence on gender differences in math-intensive STEM majors. Although women receive 50% of the undergraduate degrees in life sciences, their representation in fields such as computer science, engineering, and physical sciences lags far behind men. One of the most significant bottlenecks in STEM majors occurs before college—in middle school and high school. This presentation provides evidence to support this finding and discusses approaches to improve girl’s and women’s participation in STEM majors and careers.