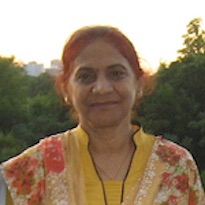 Prof Azra Khanum obtained her MSc in Chemistry from the University of Karachi and her M.Phil. and PhD in Biochemistry & Molecular Biology from Quaid-e-Azam University, both in Pakistan. She has also worked at the National Institute of Health, USA, as a Fogarty Post Doctorate Fellow (1984-1987), Visiting Scientist (1995-1997), and Adjunct Scientist (1990, 1993, 1999-2002). From 1993-1994, she was a Guest Scientist at the Netherlands Cancer Institute, Amsterdam. She has served as a Lecturer (1979-1984) and Assistant Professor (1984-1991) at Quaid-i-Azam University, Pakistan, then as Associate Professor and Professor at Pir Mehr Ali Shah - Arid Agriculture University Rawalpindi (PMAS-AAUR), Pakistan.

She has also been chair of the Department of Biological Sciences and the Department of Biochemistry as well as Dean of the Faculty of Sciences. Other roles of Director of the Division of Continuing Education, Home Economics and Women Development, as well as acting PMAS-AAUR Vice Chancellor. Thereafter she worked as Director of the Institute of Natural and Management Sciences, Rawalpindi, affiliated with University of Sargodha, Pakistan. Presently, she is associated with the Barani Institute of Management Sciences, Rawalpindi, a joint venture with PMAS-AAUR, Pakistan. Dr Khanum has been awarded many competitive research grants from national and international funding agencies. She has published 80 research papers in international and national Journals with high impact factor and citations.  In recognition of her meticulous services, the Government of Pakistan has awarded her the Tamgha-i-Imtiaz civil award. She is also a recipient of the “best teacher” award from the Higher Education Commission (HEC), and a gold medal from Pakistan Academy of Sciences. She is also Fellow of the Pakistan Academy of Sciences, Pakistan Academy of Medical Sciences, Society for Biochemistry and Molecular Biology of Pakistan and Zoological Society of Pakistan. Further, she is member of New York Academy of Sciences, USA, American Association for the Advancement of Science, USA, and American Society for Biochemistry and Molecular Biology, USA.  Presently, she is a member of Organization for Women in Science for the Developing World (OWSD) and the Association of Academies and Societies of Sciences in Asia (AASSA) Special Committee on Women in Sciences and Engineering.

The status of women in Pakistan varies considerably across classes, regions, and rural urban divide due to uneven socio-economic development and the significant impact of tribal, feudal and capitalist social formation of women life. The gender equality was specifically guaranteed in the constitution of Pakistan which was adopted in 1973. The constitution stipulates that "there shall be no discrimination on the basis of sex alone." The constitution additionally affords the protection of marriage, family, the mother and the child as well as ensuring "full participation of women in all spheres of national life". But the situation on the ground is not very favourable. Women constitute quite a low percentage in comparison to their male counterparts in STEMM fields. However, one of the significant points to be noted is that Pakistani women scientists/engineers/medical doctors in general do not face conscious discrimination in terms of salary, facilities, study leave and promotions.