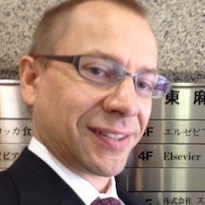 Anders Karlsson, PhD, in 2012 joined Elsevier as Vice President, Global Academic Relations, to work on strategic alliance building, mainly in the Asia-Pacific region. He also has an advisory role at the Institute of Academic Initiatives, Osaka University. Before joining Elsevier, he was for five years Counselor for Science and Innovation at Embassy of Sweden, Tokyo, Japan, with a regional responsibility for Japan and the Republic of Korea. Before serving as Science Counselor, he was for 10 years Professor at the Royal Institute of Technology - KTH, Stockholm, Sweden. At KTH he led a team working on optics and information technologies.

He was further actively involved in teaching, also as program director of one of KTHs undergraduate/graduate programs. His team participated in a number of European and national projects. His work leading a consortium on advanced information technology - quantum communication - was awarded the EU René Descartes Research Prize in 2004 for excellence in collaborative research. He has also held positions as Visiting Scientist/Teacher at NTT Basic Research Labs, Stanford Univ., École polytechnique and Zhejiang Univ. In his former and current roles, he has a strong interest in early career researcher support and science communication.

Over the past decade, the Elsevier Foundation’s New Scholars program has looked for ways to level the academic playing field for early career researchers, specifically women scientists and engineers balancing challenging scientific careers with the demands of family. With over 40 grants worth more than $2 million, New Scholars has experimented in best practices to support professional visibility and childcare; dual career retention, equity in team science, targeted mentorship and career skills training. Many of these targeted interventions have enabled universities to successfully embed modules into their PhD and postdoc programs to ensure that they keep talented women scientists and engineers rather than losing them due to archaic and gender insensitive academic systems. This presentation will share some of the best intervention modules to add to the panel’s overarching discussion on boosting women’s participation in engineering.