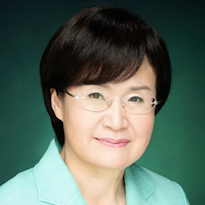 Opening Remarks, Women in Science and Technology in Asia
AASSA Regional Workshop on Gender Issues in Science Research and Education

Prof Na is a Vice President of the Korean Academy of Science, and she has been a fellow since 2002. She is also the chair of the Academy’s Women Scientist Committee. She was on the faculty of the Department of Biochemistry at University of Ulsan College of Medicine from 1990 to 2014, where she devoted herself to research in the mechanisms of inflammation and development of anti-inflammatory drugs. She has published over 130 articles and reports and has 12 patents. Doe Sun Na is considered a true pioneer and leader in science and technology, and opened an era of women scientists’ leadership. In 2005, she became the first female president of the Korean Society for Biochemistry and Molecular Biology in its 38 year history, as well as the president of the Korea Science Foundation, the first female CEO of a Korean government organization in the science/engineering fields.

Dr Na founded two organizations for woman scientists and engineers: the Women’s Bioscience Forum (WBF) in 2001 and the Korea Federation of Women’s Science & Technology Associations (KOFWST) in 2003. The membership of KOFWST has grown remarkably to 58,000, encompassing almost all women scientists from various disciplines in Korea. It is now one of the largest, if not the largest, women scientist organisations in the world. The WBF and KOFWST have contributed greatly to the empowerment of women scientists. Recently Dr Na was appointed as the chair of the Special Committee for Women in Science of the Association of Academies and Science Societies in Asia.

Professor Na has received many awards and medals, such as the Korean Order of Science and Technology Merit and Chevalier dans l'Ordre Légion d'honneur from the French government.