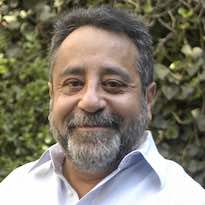 Jose Franco was born in Mexico City in 1949. He got his B. Sc. in Physics at the National University of Mexico (UNAM), and his Ph.D. in Physics from the University of Wisconsin. He joined the Institute of Astronomy of UNAM (IAUNAM) as a researcher in 1983, and became Full Professor in 1992. He obtained the UNAM Award for Scientific Research in 2002 and the Research Prize from the Mexican Society of Physics in 2009, and was appointed IAUNAM´s Director from December 2002 until December 2010. He is President of the Mexican Academy of Sciences (May 2012-May 2014) and General Director of the Science Outreach Center of UNAM.  His research interest is focused on the physics of the interstellar medium and he has worked on a wide variety of issues, including self-regulated star formation, the evolution of HII Regions, the formation and destruction of molecular clouds, the evolution of supernova remnants, the evolution of magnetized stellar winds and the shaping of planetary nebulae, the collision of high-velocity clouds with the gaseous disk, activity in galaxies, interstellar dusty flows driven by radiation pressure, and the magnetohydrodynamics of the insterstellar medium.

He has been visiting professor at several institutions including the Max-Planck Institut fur Astrophysik, the Instituto de Astrofísica de Canarias, the Czech Academy of Sciences, the University of Seoul, the Universidade de Sao Paulo, the Universidad de La Plata, the Harvard Center for Astrophysics, the University of Leeds, the University of Pisa, the Instituto Astrofísico de Andalucía.  He has served at the editorial board of a number of journals including the Cambridge Contemporary Astrophysics series of Cambridge University Press, Cambridge University, and Astrophysics and Space Science journal of Kluwer publishers. He has also served as a scientific advisor for the School of Relativity, Fields and Astrophysics at the University of Los Andes, and the Science Advisory Committee of the Gran Telescopio Canarias. He served as President of the Mexican Section of the International Astronomical Union (IAU), and was in charge for negotiating Mexico's participation in the project to build the Gran Telescopio Canarias in Spain, inaugurated in 2009.  As director of IAUNAM, he worked intensely on the promotion of astronomy at the national and international level and developed key projects for the National Astronomic Observatory in San Pedro Martir, B.C., Mexico. Also in 2009, he was one of the main organizers of the International Astronomy Year in Mexico, and was also the organizer of a Guinness Record for Mexico with the largest number of persons observing the moon with a telescope.