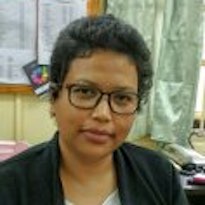 Gayatri started the not-for-profit organization Feminist Approach to Technology (FAT) in 2007. FAT is the first and only organization in India that works solely to promote women’s participation in all levels of science and technology, and questions the impact of the gender gap within technology on the society. A feminist approach to technology, as defined by FAT, is an outlook that questions the existing structures of technology and intends to have women become equal partners in developing, using, managing and controlling technology. It critiques the design, use and impact of technology. FAT believes that equal participation of women in technology and decision-making around it would help ensure that there is better balanced development and growth, promote gender equality and women's rights while attempting to see to it that widely used technologies do not affect women adversely.

Educated as an engineer, her first introduction to feminism and women’s rights was my employment at a women’s rights organization as a IT support person. Working in this role, she realized how big the gap between women’s rights and technology is and decided to do something about it. Without any formal training in social work or women’s rights, she plunged into social work because she felt the need to look at technology’s impact on women’s rights and women’s role in technology immediately and there was no existing dialogue on this subject in India at that time. Over the last 8 years, FAT has not only done some promising work and grown as an organization, but has also been able to fuel a dialogue on STEM and women’s rights within the women’s movement. Today, it operates in 4 states of India and are expanding fast. Gayatri Buragohain was awarded the Change Agent Award by Anita Borg Institute of Women and Technology, USA, in 2010.  Between 2013 and 2016, she also served as the Executive Director of Foundation for Social Transformation, an indigenous philanthropic organization in the North East of India.