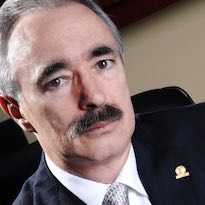 Xavier Soberón is the Director of the National Institute of Genomic Medicine. For over 35 years, he has been research scientist at the Biotechnology Institute of the National University (UNAM), of which he also served as Director. He has a PhD in Biomedical Research from the UNAM and a Bachelor in Chemistry. He has been a research fellow at City of Hope Medical Center, in Duarte California, he was also a visiting professor in David Agard's Lab at University of California, San Francisco. Since 1981, he is actively involved in the development and consolidation of the Genetic Engineering, Biotechnology and Genomics areas at UNAM. He has focused his research on the chemical synthesis of DNA and its applications in the study of proteins, the development of biopharmaceuticals and vaccines, and biocatalysis.

Genomics became an important part of his research, mainly because of the special characteristics of the Mexican populations, and its application to improving health conditions. He has nearly 100 publications; he has taught in master's and PhD's programs in Biomedical Sciences and Biochemical Sciences at UNAM; and has directed over 30 research thesis. Also, he teaches at the Bachelor of Genomic Sciences program at UNAM, which he helped create.