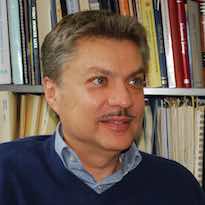 Dr Alonso Fernández Guasti is a biologist by the UAM-Iztapalapa (1979), he obtained the master degree in Physiology at the Institute of biomedical research of UNAM (1982) and the PhD from the Department of Physiology, biophysics and neuroscience of the CINVESTAV (1986). He did stays at the University of Gothenburg in Sweden and the Netherlands Institute for brain research in Amsterdam where he studied sexual differentiation in human brains. Among the awards he has received is that of the Mexican Academy of Sciences in 1997 and the Chair Ramon de la Fuente in 2013. His scientific activity is related to different areas like sex and gender differences in anxiety and depression and their treatment, brain and behavior sexual differentiation, study of sexual behavior in rodents, relation of psychoactive drugs with steroidal hormones.

He is currently a researcher at the Department of Pharmacobiology of Cinvestav, institution to which joined in 1983. In addition to his scientific career has worked on human rights organizations like Amnesty International, Mexican section, which he headed in 1993.