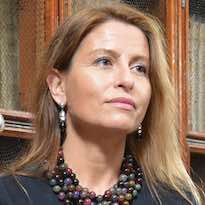 Director and Representative of UNESCO in Mexico.

Nuria Sanz has been Head and Representative of the UNESCO Office in Mexico since November 2013. She has a PhD in history and archaeology from Universidad Complutense de Madrid and La Sapienza in Rome. For over 20 years, Ms Sanz has worked in international organizations such as the European Commission, the Council of Europe and UNESCO, and a large focus of her work has been on the field of the protection of cultural and natural heritage. From 2002 to 2013, she was Chief of the Latin American and Caribbean Unit of the UNESCO World Heritage Centre in Paris, France. She has edited more than 20 World Heritage publications and has carried out extensive literary work in cultural cooperation, and on culture and development issues.

For 9 years, Ms Sanz coordinated the largest World Heritage nomination project in the history of the 1972 World Heritage Convention: the Qhhapaq Ñan Andean Road System. The serial nomination was inscribed on the World Heritage List in 2014 and was selected as a project that exemplified the good practice of cultural integration of indigenous people.