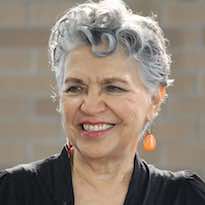 Silvia Torres-Peimbert  is the President of the  International Astronomical Union. She is a Professor at the Instituto de Astronomia of the Universidad Nacional Autonoma de Mexico (UNAM). She studied for the B.Sc. at UNAM and for the Ph. D. at the University of California Berkeley in 1969. She has been on the faculty of UNAM since 1969.   Her field of interest has been the determination of the chemical composition of HII regions and planetary nebulae in our Galaxy and other galaxies; and in general the study of chemical evolution of galaxies and the Universe as a whole. Among her many interests throughout her career it is possible to include the development of the Ph. D. Program in Astronomy at UNAM and her role editor of Revista Mexicana de Astronomia y Astrofisica for many years; at present she is the editor of Revista Mexicana de Astronomia y Astrofisica Serie de Conferencias. She is a member of  the Academia Mexicana de Ciencias; the Sociedad Mexicana de Física; the American Astronomical Society; the Astronomical Society of the Pacific; the International Astronomical Union; and The World Academy of Sciences for the advancement of science in developing countries (TWAS). Among the honours received the following can be listed: Academic Medal of the Sociedad Mexicana de Fisica; Premio de Ciencias Físicas of Universidad Nacional;  Premio Nacional de Ciencias; Premio Heberto Castillo; TWAS Medal;  Ph. D. Honoris Causa degree of Instituto Nacional de Astrofisica, Optica y Electronica; Hans A. Bethe Prize of the American Physical S