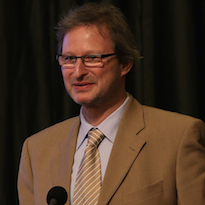 Thomas Berghöfer studied Physics and Astrophysics at the universities of Marburg and Bochum, and received his PhD from the Ludwig Maximillian University of Munich. During his active research career he was working in X-ray and EUV astronomy at the Max-Planck-Institute for Extraterrestrial Physics, the Space Sciences Lab of UC Berkeley, and the observatory of University of Hamburg. While working at the University of Hamburg he was appointed as one of the women’s representatives in the faculty of physics. Later he became a science programme manager in the German research funding system of the federal government. He is very experienced in coordinating larger consortia in Europe such as the ERA-NETs ASPERA and ASPERA-2.

In 2013 he was elected General Secretary of the Astroparticle Physics European Consortium APPEC and is currently the coordinator of the EU funded GENERA project. GENERA is a new Horizon 2020 project aiming at continuing, monitoring and improving the Gender Equality Plans of Research Institutions and Organizations specifically in the physics research field. These three actions will be performed by a Consortium of 12 beneficiary partner research performing and research funding organizations and a number of associate partners and observers.