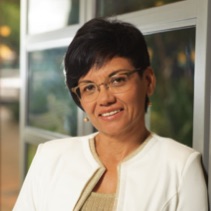 Beverley is the Group Executive: Science Engagement and Corporate Relations of the National Research Foundation of South Africa, driving policy and strategy development and implementation in the areas of advancement of research and technology, public communication and engagement with science, science education as well as corporate communications and stakeholder engagement.  The NRF is the premier research and science development agency in South Africa which promotes South Africa’s research interests across the country and internationally.

She has more than a decade of executive leadership experience, having been the previous Executive Director of the South African Agency for Science and Technology Advancement (SAASTA) from 2003-2012 and served as Acting CEO of the NRF for an interim period of 10 months during 2015. She has well established international networks and has represented the NRF in various international portfolios and platforms.  She is a member of The International Women’s Forum of South Africa (IWFSA), the NRF Board, the Advisory Boards of the South African Young Academy of Science (SAYAS) and the Scienza Science Centre of the University of Pretoria. She also served as an immediate past member of the Technology and Human Resources for Industry Programme (THRIP) Advisory Board, and the Board of the Cape Town Science Centre. She obtained a BSc (Microbiology and Plant Pathology), B.Ed and MEd from the then University of Natal (now University of KwaZulu Natal) and a doctorate degree (Education Policy and Management) from the University of Pretoria.