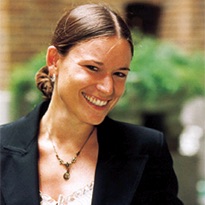 Status Quo of the Integration of Sex and Gender Aspects in Medical Education in German Universities
Parallel: Integrating sex and gender in research and researcher training

Sabine Ludwig is an economist and sinologist and has studied in Paris, Shanghai, Beijing, Berlin and Frankfurt. She has worked at the European Commission Directorate General External Relations in Brussels, Belgium and has then joined the European Commission in Beijing, China where she worked in the development and cooperation section focusing on Gender Mainstreaming in EU development cooperation. After six years in China, she returned to Germany in 2008 where she works at Charité - Universitätsmedizin Berlin. Her first assignment was as research officer within the Masterprogramme International Health, she then joined the curriculum development team for the new modular medical curriculum at Charité Berlin, where she was in charge of integrating gender dimensions and perspectives into the new programme. Currently she works in the quality management and evaluation unit of the department of medical education at Charité.