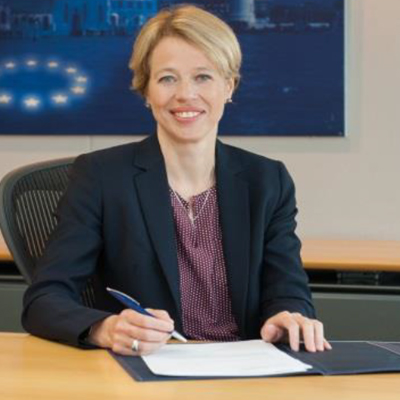 H.E. Barbara Plinkert began her term as the EU Ambassador to Singapore in 2017 - a historically significant year as the EU turned 60 and ASEAN 50; and the EU and ASEAN marked 40 years of ties. Singapore's importance as a regional partner is being further emphasized by its three- year role as ASEAN's coordinator for EU relations since mid-2018 and by the signature in October 2018 of three landmark agreements: the EU-Singapore Free Trade Agreement, the EU-Singapore Investment Protection Agreement and the EU-Singapore Partnership and Cooperation Agreement. Prior to her assignment in Singapore, Ambassador Plinkert was Head of Division responsible for Headquarters Security and EEAS Security Policy at the European External Action Service in Brussels. Before that, she served in various positions in different parts of the world. From 2011-2015, she was based in Addis Ababa as Deputy Head of the EU Delegation to Ethiopia. Prior to that, she has held key positions within the EU with postings in Zimbabwe, Tajikstan and Kazakhstan. Between 1998 and 2003 she worked for the United Nations Office on Drugs and Crime, which took her to Afghanistan. Ambassador Plinkert speaks English, German, French and Chinese. She holds a Masters of Arts degree in Sinology, South-east Asian studies and Linguistics from Free University of Berlin.